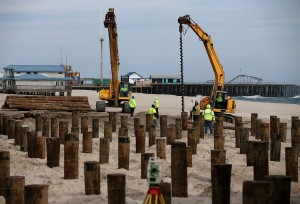 Original article can be read here.

They also think anyone who ignores federal advice about rebuilding should face serious consequences. That’s just a portion of the results from the most recent Fairleigh Dickinson University-PublicMind poll released this morning.

“By an almost two-to-one margin poll respondents told us property owners should be required to rebuild in a way that makes their dwelling better protected rather than allowing homeowners to rebuild in whatever manner they choose,” explains Krista Jenkins, Director of PublicMind and professor of political science at Fairleigh Dickinson University. “Also by about a two-to-one margin people believe that a failure to heed the advice of FEMA when rebuilding should result in a forfeiture of federal assistance for property owners if another big storm damages their property or wipes it out as opposed to allowing them to recoup their losses.”

Garden Staters of all political and social stripes agree with mandated rebuilding in a specific way. Education is about the only clear predictor of attitudes toward rebuilding, with the educated more strongly in favor of directed rebuilding than those with less than a college degree.

Those with college degrees are significantly more likely to say those affected should be required to rebuild in a specific way (72 percent) or run the risk of forfeiting future assistance (66 percent) as compared with those with high school degrees (53 and 45 percent) or some college (56 and 56 percent).

Even partisanship, something that often divides Garden Staters on issues related to public spending and government intrusion into private matters, is unrelated to attitudes toward rebuilding.

“This is a touchy subject,” says Jenkins. “On the one hand, there are rights of property owners who wish to maintain their freedom to rebuild in the manner they both choose and can afford, while one must also consider the public’s right to make sure money isn’t spent on those who fail to take adequate precautions against the darker side of Mother Nature.”

The vast majority of Garden Staters were either unaffected personally by Sandy (64 percent) or are now completely recovered (21 percent), but one in seven (15 percent) still say they’re struggling to get back what was lost over four months ago. Their plight is recognized by many New Jersey residents.

When asked if they were satisfied or unsatisfied with the pace of federal assistance to the state, half (51 percent) report dissatisfaction, while significantly fewer (30 percent) are satisfied.

“Taken as a whole, these numbers suggest that Garden Staters are looking for everyone to act responsibly in the aftermath of Sandy,” explains Jenkins. “Property owners should rebuild with adequate protections in place and the federal government should do more to help the hardest hit.”