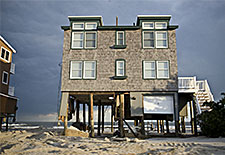 To paraphrase Robert Young, Director of the Program for Study of Developed Shorelines, we are merely pulling up our pants in response to sea level rise, not getting out of the rising water’s way.  One year after Hurricane Sandy devastated parts of the U.S. East Coast, the government is spending billions to replenish beaches that will only be swallowed again by rising seas and future storms. It’s time to develop coastal policies that take into account new climate realities.